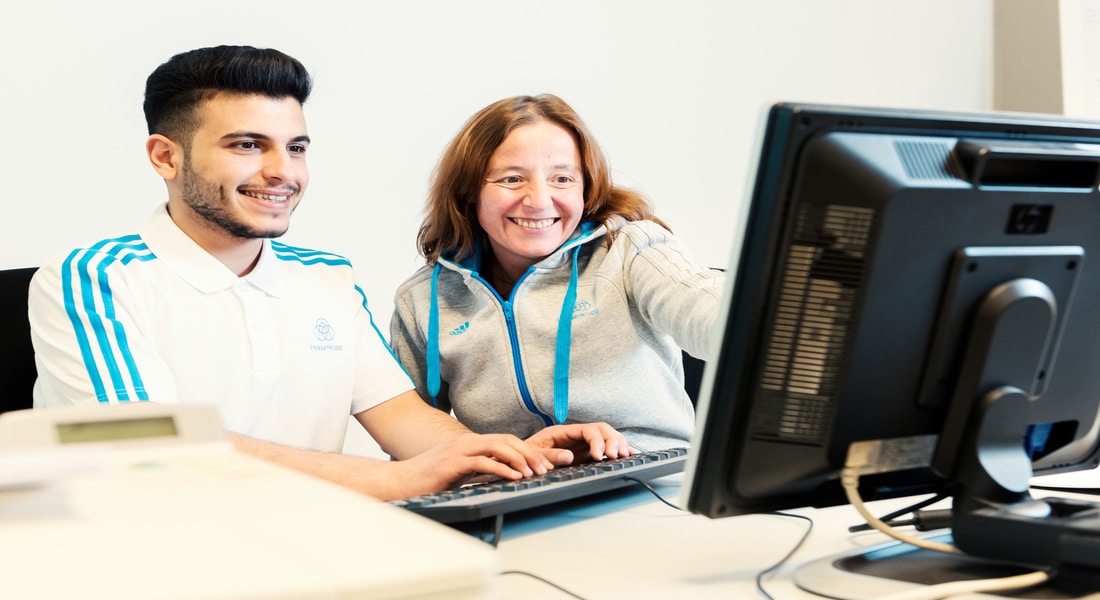 “Work is an engine for integration” says Oliver Burkhard, Chief Human Resources Officer of thyssenkrupp. In 2015, the company committed fully to this idea, piloting a hiring and training program for refugees to Germany. thyssenkrupp’s efforts spawned an even larger national integration initiative, headed by German companies.

In response to the mass migration of refugees to Germany in 2015, engineering firm thyssenkrupp took action. The company looked at the German corporate landscape and didn’t see anything it could replicate. So, thyssenkrupp created its own unique employment program for refugees.

Called We Help, the company committed to creating 150 apprenticeships and 230 internships for refugees at its German companies.

In Germany internships are three month work experiences provided for unskilled workers or students. In the new program, each refugee spends the three months gaining an insight into a particular job at thyssenkrupp. Apprenticeships, also called vocational programs in Germany, are a longer commitment for thyssenkrupp. Refugees enter and complete a three-year program, which includes a mix of part-time studies and part-time work. At the end of their training Apprentice refugees receive an official Certificate, indicating they are a skilled worker in Germany. Apprenticeships and internships are offered in all five business areas, in both blue and white collar jobs.

According to thyssenkrupp Corporate Human Resource Manager, Sabrina Munsch, it made sense for the company to take the lead: “It’s in our mission statement. It’s in the DNA of the company to be socially engaged. We have always taken care of our employees. We say a lot about taking care of our customers, but also take social responsibility seriously; responsibility for our country, community, and employees.”

Despite having diversity and inclusion baked into the company, support for a new initiative for refugees was not taken for granted. The company oriented and trained its Human Resources staff before implementing the program. It provided intercultural competency and religious accommodation training, as well as information about refugee source countries. Given the politics of refugee migration into Europe, it was also important to stress across the company that no German-born workers lost their job or opportunities in the company. This would be a unique effort, building on other socially responsible work the company did.

Munsch says thyssenkrupp thought implementing their modest program would be relatively straightforward. After all, they had almost one million refugees in Germany to work with. However, they found it was not so easy.

Not having other German models to learn from, thyssenkrupp was breaking new ground. They found the biggest challenge in language ability. Most refugees didn’t speak German. Beyond the need to speak German for effective workplace communication, the company needed to ensure that every worker understood health, safety and security guidelines.

To address the language barrier, they offered German-language classes, held during working hours. With additional government support, thyssenkrupp Apprentices can access additional educational opportunities, and language tutoring. Along with training, both company trainers and refugees can access employment supports, such as counselling for PTSD or other issues that might come up related to the refugee experience and integration into a new country.

There were also the realities of the asylum process. Processing claims in Germany was taking a long time, and there were no guarantees asylum seekers would be accepted. Initially, thyssenkrupp was only able to offer an apprenticeship place to refugees whose asylum claims were approved. The company needed to ensure that the refugees they hired would be able to stay in the country for their three-year vocational training, and beyond.

In Summer 2016, Germany passed a new law, allowing refugees who hadn’t yet received a decision on their asylum application to stay in Germany if they were enrolled in a three-year apprenticeship. Even if their asylum application was rejected during those three years, they would be allowed to complete their training. This change allowed thyssenkrupp to hire within the entire refugee pool for their apprenticeship program. Munsch says the change made it a lot easier for thyssenkrupp, and other German companies, to find qualified applicants for their programs.

Sixty new Apprentices will start in September 2017, and the last trainees will be hired in 2018. Over 300 internships have already been provided, surpassing their original commitment of 230.

The internships are short-term experiences and most are not hired after as employees. However, a few refugees were offered apprenticeships and student assistant positions after their internship. Munsch says thyssenkrupp is hopeful that most of their Apprentices will stay with the company. Not all Apprentices will become thyssenkrupp employees after their three years, but she says that the refugees who worked at thyssenkrupp will have very good chance of finding work in other companies. In the end, helping to develop a skilled worker with recognized qualifications is also good for the German labour market.

“Work is an engine for integration”

thyssenkrupp recognizes that employment is essential for integration. As they built up their We Help program internally, it made sense to think bigger. In 2016, the company helped create a national initiative, inviting other companies to learn and help refugees. Thirty-six German companies created ‘We Together’, committed to providing them with employment and integration opportunities.

By 2017, that number has grown to almost 200 companies. Each company provides support in its own way, using its own unique offering and approach. From employment to health care to sports and recreation, “We-together” projects foster and grow German company-led projects to promote the long-term integration of refugees.

Munsch says there was really no alternative but to act: “The refugees are here. They’re here because they need help. They fear for their lives in their home countries. We have to help them become part of the community, build a good life here. Every company must do something.” From a business perspective, Munsch says “We have also learned a lot from them. We’re a more diverse company because of refugees. We have invested, but also get good, trained workers who will be loyal and will become skilled members of the company to help us succeed.”

Munsch says it is important to give refugees hope. “If they lose their hope, that’s good for no one. If I were a refugee, I wouldn’t want that. I don’t want that for them. I would hope to get help wherever I might end up.”

thyssenkrupp’s mission includes a commitment to community, diversity and inclusion. We Help, and We Together, are living examples of that commitment, and how efforts like these continue to be good for their bottom line.